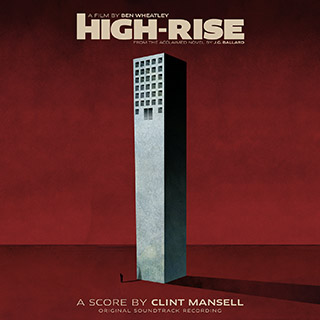 01 Critical Mass
02 Silent Corridors
03 The World Beyond the High-Rise
04 The Vertical City
05 The Circle of Women
06 “Built, not for man, but for man’s absence”
07 Danger in the Streets of the Sky
08 “Somehow the High-Rise played into the hands of the most petty impulses”
09 Cine-Camera Cinema
10 A Royal Flying School
11 The Evening’s Entertainment
12 Blood Garden

“The soundtrack sounded incredible in the cinema. I was very f**king happy indeed… Revel in the sound of a bombastic and hubristic 70s that was doomed to failure… Enjoy.” Ben Wheatley

Described by Hollywood Reporter as “a lustrous retro-classical score bursting with ironic good cheer”, Clint Mansell’s music has a meaty, steadfast presence throughout the visual spectacular of the savage societal breakdown.

Former Pop Will Eat Itself frontman turned soundtrack composer, Clint Mansell is best known for his work with long time collaborator Darren Aronofsky (Requiem for a Dream, Black Swan, The Fountain, Noah). He also scored Duncan Jones’ Directorial debut Moon, and He has also lent to his talent to films as diverse as Filth, Faster, and Last Night.