Music From The Star Wars Saga 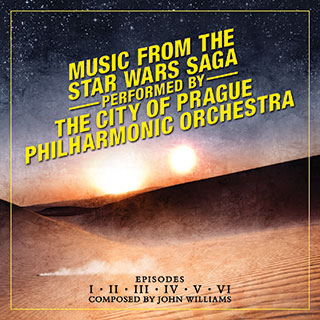 38 years ago in March 1977 John Williams entered a studio in the beautiful English village of Denham to begin recording the score for Star Wars, a film that would become legend, not just for its cinematic milestone but also for its triumphal music.

Highlights include The Imperial March , Forest Battle, Duel Of The Fates and The Throne Room/Finale, the latter the masterful ending to the original 1977 Star Wars and the Oscar winner for best score.

Episode V: The Empire Strikes Back
05. The Imperial March
06. Han Solo And The Princess
07. The Asteroid Field
08. Yoda’s Theme

Episode I: The Phantom Menace
10. Anakin’s Theme
11. The Flag Parade
12. The Adventures Of Jar Jar
13. Duel Of The Fates

Episode II: Attack Of The Clones
14. Across The Stars

Episode III: Revenge Of The Sith
15. Battle Of The Heroes