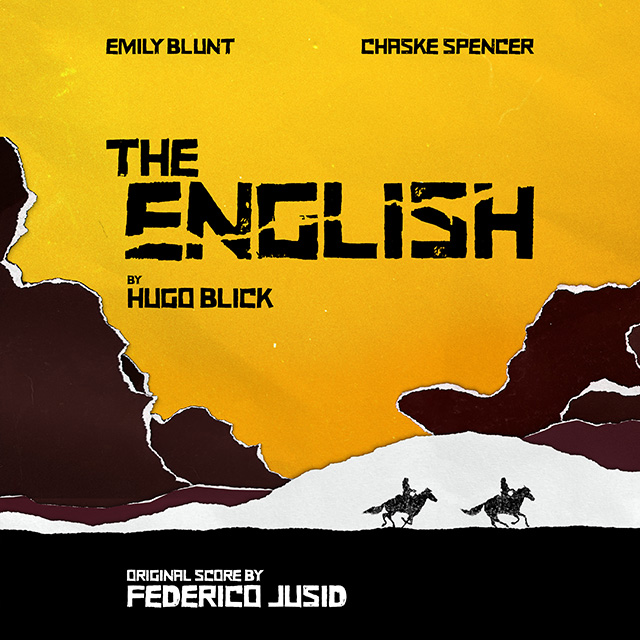 The English, Federico Jusid’s sweeping, nostalgic and raw score to Hugo Blick’s 6-part contemporary Western. Giving a nod to 1950s western soundtracks, the score is enriched by Dvořák’s String Quartet No. 12. known as the “American”, written during Dvořák’s stay in America, and only 3 years after the events of the series. Also featured on the album are the beautiful folk songs by The Wailin’ Jennys, Melanie, Crooked Still, Ora Cogan and Tom McRae. The second track on the album, Tâtačiksta_ – I Cherish You, features a tender reading by Emily Blunt.

“It is a production that pulls you into its aesthetic from the first moment you see the evocative title sequence by Scatterlight Studios, which also clues you into how Federico Jusid’s score will add to the grand sweeping scale. Jusid taps into the spirit of legendary composer Ennio Morricone without feeling derivative or like he is merely mimicking the master of this genre. Blick incorporates tracks by singers like Rodriguez and Melanie that are obviously not accurate to the era but add to the emotional tone. It is a masterclass in mixing contemporary elements with a period piece without pulling you out of the setting.” – The Playlist

Jusid’s music structure is based on leitmotifs, very simple and symmetric, constantly varied and developed to mirror the protagonists’ journeys. Big orchestral sounds underpin epic and romantic themes. Sound design, processed percussion and ethnic instruments effortlessly blend in with the orchestral material. Frederico describes his compositional process – “Unlike other projects, I started working with Hugo Blick, at a very early stage, some time before he even started shooting. Inspired by the scripts, his story board and chatting about the classics, I wrote different piano tunes and first mock-ups and sent them over to him… Often, I have received scenes cut to my own music and that made the process deeply organic and profound. The music became a core element of the structure of the show, instead of a later addition. In the end, Hugo and I worked for an entire year to develop this score. This is about four times the usual time I get to work on any other project, especially nowadays, that deadlines and fast deliveries curb the creative processes so dramatically.”

The English will premiere in the UK on 10th November on BBC Two and BBC iPlayer, and in the US and rest of the World on 11th November on Prime Video. The show is written and directed by Hugo Blick (The Honorable Woman, Black Earth Rising) and stars Emily Blunt, Chaske Spencer, Stephen Rea, Valerie Pachner, Rafe Spall, Tom Hughes, Toby Jones and Ciarán Hinds. The 6-part western drama tells the story of an aristocratic Englishwoman and a Pawnee ex-cavalry scout who come together in 1890 middle America to cross a violent landscape built on dreams and blood. The Guardian recounts it as a “brutal, beautiful tale of the Old West… all oil-dark humour, elite-level acting and gorgeous, lingering wide shots”, whilst the FT observes that “Between the exquisitely choreographed stand-offs – all twitching fingers and shifting eyes – the Morricone-inflected soundtrack, the sweeping vistas and the cool, broody dialogue, Blick delivers a stirring love letter to the great westerns of yesteryear.”Blick and Blunt are also executive producing the Drama Republic production with Greg Brenman (Billy Elliot, The Boys Are Back).

Up and coming composer, Federico Jusid’s writing for Watership Down has been lauded by Movie Music UK as “sensational” and even, further praised as superior – “the action music is superior, the variety of the orchestrations is superior, the thematic depth is superior.” Federico is an Award -Winning composer. In 2016, Federico Jusid was recognized as Composer of the Year by the Spanish Music Critics Association. He won three International Film Music Critics Association (IFMCA) awards for his music on the Spanish historical fiction series, Isabel, and won two additional IFMCA awards for his score on Carlos, Rey Emperador. Additionally, Federico received two Platinum Film Award nominations for scoring the critically acclaimed biographical film, Neruda and Salvador del Solar’s political thriller Magallanes. Federico has received dozens of international music awards for his music on more than sixty features and thirty TV series worldwide.