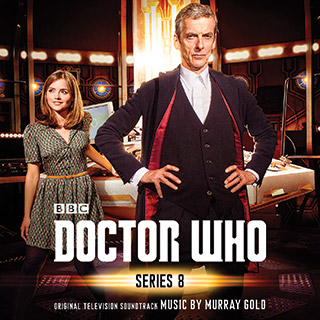 Nine years, 10 albums, 444 tracks, a phenomenal musical output from composer Murray Gold whose much loved scores for Doctor Who reach a new high with this three CD set covering Series 8.

A new take on the classic theme coupled with a new theme for the twelfth Doctor launch this lavish collection featuring extensive notes from the composer and music from all 12 episodes over two CDs, the third disc comprising of 14 tracks from the 2014 Christmas Day special Last Christmas.

“Ever since Doctor Who’s revival in 2005, Murray Gold’s incidental music has become as iconic as the theme tune (originally composed by Ron Grainer) he re-arranged. It takes sadness and provokes tears. It takes danger and quickens the pulse. It takes adventures through time and space with a mad man in a box and – somehow – makes it all seem even more weird and wonderful than it already is.” – Radio Times

This exciting new release has been much in demand by fans and displays the extraordinary versatility of Murray Gold’s music for one of the BBC’s biggest worldwide exports.