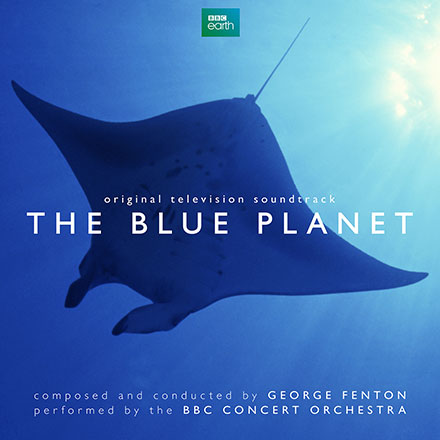 A remastered reissue of George Fenton’s stunning orchestral score, which won Ivor Novello, Bafta and Emmy awards for Best Television Score on release in 2001. Produced by the BBC and narrated by David Attenborough, The Blue Planet series was watched by more than 12 million people when it aired on BBC1 in September 2001. It has since become a global phenomenon, showing in more than 50 countries “For as long as music has been written, the sea has been a major source of inspiration for composers; but not one of them had my luck in being given the amazing images of The Blue Planet. Three years ago when I was asked to write the music, I imagined footage which would be awesome, terrifying and magnificent. It is all of these things, but my lasting impression and for me the greatest achievement is that the remarkable films Alastair Fothergill, Martha Holmes and Andy Byatt have made, actually manage to make the oceans feel as natural a habitat as the land. They have achieved this by a spectacular mix of scientific knowledge and dramatic flair. They love what they do and it shows. The same is true of David Attenborough. His commentaries are distinguished in their understanding, love of the subject and luckily for me, their musicality.” – George Fenton