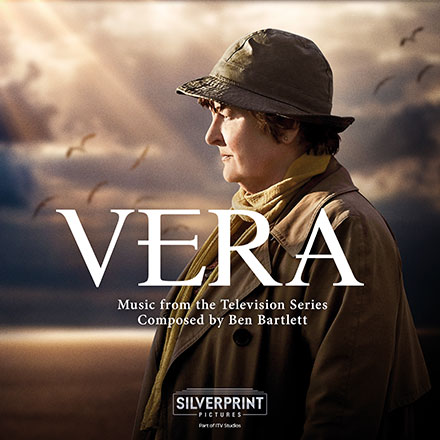 BAFTA and Golden Globe-winning actress Brenda Blethyn stars as the eccentric but brilliant DCI Vera Stanhope. Unconventional and unglamorous, Vera faces the world with her caustic wit, guile and courage and what she lacks in charm she makes up for in wisdom and insight.

Ben Bartlett’s soundtrack perfectly complements the atmospheric Northumberland landscapes that the series is set in. Vera’s music theme started from a very simple idea of four chords, originally used to score the heartrending opening scene of the very first episode. The sweeping melody enveloping these four chords became more prominent as the music developed, and has gradually formed into the instantly recognizable, haunting and elegant theme of the series.

The score for Vera is full of musical miniatures that have become part of the fabric of the show, and some of the dramatic highlights have been selected for the album here. On this album, and in the score, the piano is played by Ben Bartlett.

Ben Bartlett is a London based TV and concert composer known for his prolific music output for drama, comedy and documentaries. Recently, Ben’s music was featured in SKY 1 hit series Stan Lee’s Lucky Man, ITV’s The Loch, Sky Atlantic’s critically acclaimed The Tunnel. For his score for Walking with Dinosaurs Ben won a BAFTA in 2000 and was nominated for Primetime Emmy. He was also nominated for RTS (The Ghost Squad, The Mark of Cain, Mutual Friends) and Ivor Novello Awards (Fiona’s Story). Ben also writes for concert hall and theatre. He received critical acclaim for his mini-opera El Tigre, based on a poem of Pablo Neruda, and his piano work Caprice was performed at The Queen Elizabeth Hall, London.